Book Review: A Darker Shade of Magic by V.E. Schwab 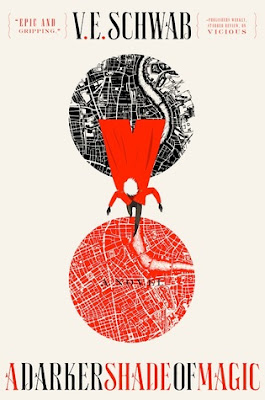 
Kell is one of the last Antari—magicians with a rare, coveted ability to travel between parallel Londons; Red, Grey, White, and, once upon a time, Black.

Kell was raised in Arnes—Red London—and officially serves the Maresh Empire as an ambassador, traveling between the frequent bloody regime changes in White London and the court of George III in the dullest of Londons, the one without any magic left to see.

Unofficially, Kell is a smuggler, servicing people willing to pay for even the smallest glimpses of a world they'll never see. It's a defiant hobby with dangerous consequences, which Kell is now seeing firsthand.

After an exchange goes awry, Kell escapes to Grey London and runs into Delilah Bard, a cut-purse with lofty aspirations. She first robs him, then saves him from a deadly enemy, and finally forces Kell to spirit her to another world for a proper adventure.

Now perilous magic is afoot, and treachery lurks at every turn. To save all of the worlds, they'll first need to stay alive.

I have been gloriously and spectacularly underwhelmed.

I think this was largely a case of an amazing plot in an underwhelming story. As a basic premise, you have a multiverse world where four London's sit on top of each other, each one sitting further from the universe's original source of magic. Black London, a city of legend that was destroyed generations ago, was consumed by the magic, while White London, Red London, and Grey London sealed themselves off from each other. Only two people alive possess the type of magic--blood magic--that allows you to travel between worlds.

Cool, right? Sure, if anything happened with it.

Our main character is one of the two blood magicians named Kell. He was adopted by the Red royal family when he was five and had nothing but a knife with the letters KL. Kell. Invented his own name right there. Ladies and gents, we've got an edgelord here! But in all honestly, Kell wasn't an awful protagonist, just a rather bland one. He's somewhat mysterious. Somewhat attractive. He's got some moral ambiguity going, but he's generally a good guy. For a 400 page book with next to no plot going, I need something more than "kinda cool" from an MC.

Lila on the other hand was just intolerable. Badass crossdressing lady pirate wannabe with a troubled past? I thought we were over that trope in like 2000. 2005 if we're pushing it. She just doesn't want to be a lady and dreams of the open seas and just loves stabbing things. Short of some cliffhangery suggestions at the end, she doesn't even serve a real purpose in the plot aside from stabbing the people that Kell doesn't get to first and being edgy.

There were some cool side characters I guess? I get the impression from talk of these books that Rhy is a bigger character next book. Then you've got the other blood magician, some inn keepers, Kell's mentor, et. al. who truly don't do anything. Several times I think I was supposed to be sad that someone died, but it's hard when they were only introduced 20 pages ago.

Am I setting the bar too high? Probably. I was just expecting to love this and yet I practically DNF'd halfway through. What am I missing that got everyone raving?