Book Review: The Boy in Red by E.M. Holloway 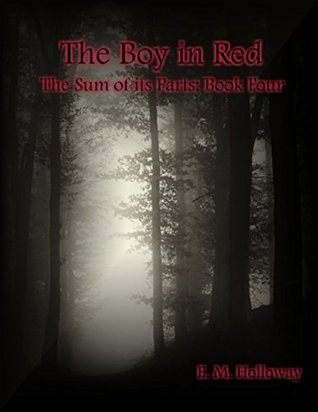 
Just when Puck thinks he might get a break, a warlock turns up in town and starts targeting his pack with dark magic. With no better options, Puck is forced into a cat-or-mouse game with their enemy. The struggle to keep his pack safe takes its toll on Puck in more way than one, and he finds himself facing threats he never would have expected.

If it's even possible, I think this may have been better than the last book!The Sum of It's Parts series has two incredible things going for it. One, it is an incredibly diverse an inclusive cast of characters with well handled social issues. The second is that it is a damn good story!All of these books are somewhat episodic. This picks up with Puck, a human alpha of his werewolf pack, and the rest of his gang just sort of doing their thing. They hold down a territory--where sometimes threats pop up and are dealt with, they go to high school, they have teenage drama, and they do wolfy things. It's frequently mentioned that minor trouble arises in between books, but each book picks up when a major event happens. I find it refreshing that the overarching story is supplemented by these events, but we aren't subjected to absolutely everything that happens to the pack. It gives me the sense that these characters live outside of the confines of the pages.In this particular installment, the pack is being threatened by a warlock who has shown up in town with no apparent intention other than to screw with Puck's life. The whole last book was about him proving that he is a good alpha, despite being a human, but that was judged by a tribunal of other werewolves who have led wholly supernatural lives. Without giving away too much of the plot, this was a beautiful shift in Puck's character as Sebastian largely challenges Puck on his humanity. After all, the moral compass of a supernatural being is something different than that of a human. As it has been so important to Puck to remain human in the face of everything, it's fitting to finally see what that really means with the lifestyle he has chosen.Now for the meaty stuff. I am personally both someone who suffers from PTSD and identifies as asexual. I know that no narrative or fictional character can ever truly be a stand-in to generalize any sort of social label, but let me tell you, I *get* these characters. There's something to be said for an author who doesn't just use PTSD as a plot device. In fact, Puck's PTSD, even more than his tangible flashbacks and memories, largely affect his life in the way it effects his general sense of personal safety and security. Understanding the mind of a character living with that takes a lot more than a WebMD search of PTSD symptoms, so major props to Ms. Holloway.The reason I picked up this series in the first place was that it was lauded in asexuality communities as a well-written asexual relationship, and I whole heartedly agree."I'm straight, but in love with Connor even though I don't want to have sex with him, and Connor's asexual, but in love with me, so it all works out even though there's no word for it in the general population's vocabulary."That quote is pulled from a conversation where Puck is explaining to an outsider who Connor is. But short of this explicit info-dump, this relationship hits the nail on the head of the old "show don't tell." Puck and Connor are a beautiful exploration of a relationship that is entirely devoid of sexuality with no loss of intimacy. Reading four books now, I've been terrified of the point where the author will buckle down and have them do something sexual, but as it stands, they have not so much as kissed, which is just beautiful to me. Ms. Holloway is able to portray two people who love each other enough to just curl up in a ball and cry on each other, but not give in to the easy route of telling their story with tropes or grand romantic gestures.This series is beautiful. Truly. It's not just a SJW textbook of how to write inclusive fiction--it's a fully developed story that doesn't shy away from difficult issues or complex characters. Please do yourself the favor of picking this up!

Email ThisBlogThis!Share to TwitterShare to FacebookShare to Pinterest
Labels: book review, e.m. holloway, lgbtqia, the boy in red, the sum of its parts