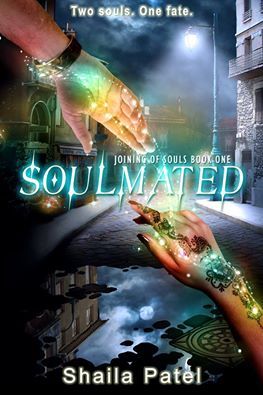 Eighteen-year-old Liam Whelan, an Irish royal empath, has been searching for his elusive soulmate. The rare union will cement his family's standing in empath politics and afford the couple legendary powers, while also making them targets of those seeking to oust them.

Laxshmi Kapadia, an Indian-American high school student from a traditional family, faces her mother's ultimatum: graduate early and go to medical school, or commit to an arranged marriage.

When Liam moves next door to Laxshmi, he’s immediately and inexplicably drawn to her. In Liam, Laxshmi envisions a future with the freedom to follow her heart.

Liam's father isn't convinced Laxshmi is "The One" and Laxshmi's mother won't even let her talk to their handsome new neighbor. Will Liam and Laxshmi defy expectations and embrace a shared destiny? Or is the risk of choosing one's own fate too great a price for the soulmated?

As an unabashed lover of all things happily-ever-after, Shaila Patel's younger self would finish reading her copy of Cinderella and fling it across the room because it didn't mention what happened next. Now she writes from her home in the Carolinas and dreams up all sorts of stories with epilogues. A member of the Romance Writers of America, she's a pharmacist by training, a medical office manager by day, and a writer by night. Her debut, SOULMATED, won the 2015 Chanticleer Book Reviews' Paranormal Awards for Young Adults, and is part of her Joining of Souls Series.

Shaila loves traveling, craft beer, tea, and reading a good book in a cozy window seat—but she'll read anywhere. You might even find her sneaking in a few paragraphs at a red light, or connecting with other readers online.
Website / Twitter / Instagram / Newsletter

II'm not even a contemporary romance reader, but this book had me so hooked that I read it in one sitting! Well done!

In Patel's debut Urban fantasy, 18-year-old Liam is one of a long line of Empaths who have an entire society hidden from the public eye. Not only is he the newly appointed head of his clan and one of the most powerful Empaths alive, but he is also fated to be "soulmated," - a rare phenomenon that promises him vague and unimaginable power. The only problem is that he has to find her.

Thanks to his dad's premonitions, Liam knows a few details, including that she is Indian American. So for the final year, Liam is starting a new high school and dating a new girl, but Laxshmi "Lucky" Kapadia doesn't seem like all the other girls, and for the first time, she checks off every one of Liam's father's premonitions. Could she be "The One?"

<i>Soulmated</i> was the perfect balance of urban fantasy and contemporary romance! For a so-called paranormal fantasy, I tend to expect something vaguely descended from Twilight, but the idea of Empaths was a unique and refreshing foray into the genre for me! Liam's early chapters lay the groundwork for the world of this series without bogging the plot down too much. And meanwhile, we get Lucky's narration of a normal American girl to snap us back into the normalcy of the world.

Liam is a fairly typical male love interest (I supposed as a female reader I'm supposed to be swooning), but I didn't find his predictability too boring. Lucky was the character I found to be really amazing. She's quirky but level headed. Her narration has plenty of girlish squeeling and "oh my god does he like me or not," but in a very realistic and rational way that really reflected the mind of a 16-year-old girl.

The really unique thing that this had for Urban fantasy was so much real-world culture building. I have no idea how accurate the Irish side was for Liam, but the author used her experience as a woman of Indian descent to craft a beautifully complex coming of age story as Lucky grapples with cultural expectations and her identity as an "Americanized" teenager.

The colliding of their worlds was great. Liam, who has been searching for his mystical soulmate his whole life, has suddenly realized the implications of pulling someone he loves into the dangers of his world. Meanwhile, Lucky doesn't know whether to trust her heart to a mysterious boy full of secrets when she has been told her whole life not to trust anyone outside of her culture. Aside from the whole fated soulmate thing, they are the perfect foils to each other in growing up and figuring out their own identities.

Major kudos to this debut author! I'll be keeping an eye out for her work!
Posted by Nina @ Looseleaf Reviews at 1:22 PM