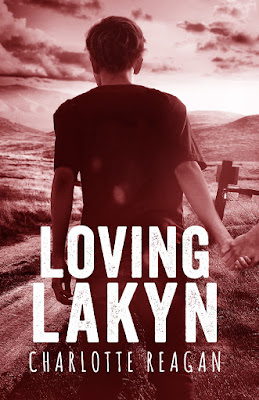 Lakyn James is sixteen years old and hating every second of it. He was supposed to be done, he'd tapped out. End of story, unsubscribe here. Suicide "attempt", they said. His intentions had no "attempt" in them. Re-entering normal life after ‘trying’ to take his own is weird. Especially when the world keeps going like it never happened. He still has to eat breakfast, go to school, and somehow convince a cute boy that he’s too damaged to date.Scott White comes with his own problems, namely a habit of drinking too much and being indecisive about rather he wants in the closet, or out of it. Lakyn can’t stand him; he also can’t help smiling when Scott’s around.Unfortunately - or fortunately - for Lakyn, life has decided to give him a second chance. He's not happy about it, but maybe, with a lot of hard work and a good therapist, he can learn to be. And maybe he can hold Scott’s hand at the same time.No promises though.

Hey guys I'm Charlotte Reagan!I'm 23 years old; born, raised, and currently residing in a small town in Texas with my cat. I've been writing pretty much all my life, even when I was too young to know how to put my stories down on paper. Once I started I couldn't seem to stop! I still have boxes of old notebooks filled with ideas and plots that I never finished. I write young adult romances focusing primarily on the LGBT+ community. I hope to have lighthearted stories that bring about hope, laughter, and maybe even a few tears. I can usually be found with my laptop or off traveling somewhere!The LGBT+ Community and LGBT books have always been a source of great support for me and I hope that my books can maybe be there for someone else.

If you follow my reviews or blog, you’ve probably picked up on how much I utterly adored Just Juliet. Not only was the book amazing, but working with Charlotte for the launch was incredible as she is such a well spoken and lovely person. When I was approached about reading Loving Lakyn, I knew I wanted to be a part of the launch again, but here’s the thing: I don’t review books that include self-harm because it’s a hard subject for me. I’m in a better place than I was when I originally made a hard and fast rule for myself about that, and after sitting down and discussing it with my therapist, I sat down and binged this book in a day.

Here’s the thing I knew as soon as I picked up the book: it is a damn good book.

The title serves as a pretty good summary to the book: it’s about learning to love Lakyn. Lakyn is a high school boy with a hard life. He is gay in an unwelcoming family and an unwelcoming world. He suffers from mental illness and for many years, has no real support network for dealing with it. He handles it with self-harm and self-destruction. There are few people he cares about and the few he does have he pushes away.

Here’s the thing: Lakyn is not a pleasant character. He is throughly miserable and does miserable things, and while this book is about his happiness improving, there isn’t a magic fix-all that makes him as “happy” as he seems in Just Juliet. So that means that this book really is his inner dialogue, and this is about how far he gets in his recovery. That’s just so spot on to how it is, how different a person’s head is from the perception of those around them, and that was subtly and beautifully written.

The new perspective on Juliet was also fascinating. Aside from loving another glimpse into her character, she held an important place in this book in recognizing that you can’t save everyone. As a person who has been fighting depression for years, I can tell you, depression glasses make it a lot easier to see other depressed people. Lakyn spends so much time helping himself and helping Scott that, at a point, he realizes he has not been helping Juliet. It opens an interesting debate on whether he had a responsibility to help her just because he noticed her spiraling. Should he have said something? Should he have sat his uncle down and demanded help for Juliet? How could he have done that when he wasn’t even over the hurdle of asking for help himself? Without giving a direct answer or glorifying one way or the other, I think this painted a realistic relationship of one struggling person relating to another.

The love story itself is what really got me, though. Again, it’s spiraling person meets spiraling person. But Scott is a unique character in how deeply hidden his pain is. He’s a jock, he has friends, he has a stable life. But these things don’t protect your from prejudice, internal or external, and it really takes the whole book for Scott to unravel his struggles let alone overcome them. It’s also an exploration into the difference between being closeted or out, and the expectations of what acceptance will look like versus the reality of when it doesn’t. Without giving away the story, the romance plot is beautiful, and most importantly to me, it is not about them fixing each other. There is a point that Lakyn realizes how easy it is to fall down the rabbit hole of saying “Scott makes me happy and therefore Scott is the source of my happiness,” but there is a major hurdle he overcomes in recognizing that relationships cannot work with that kind of expectation. Not only does he not drag Scott down with that, but he also recovers with Scott’s *help* but not by pawning off his problems.

I’m ranting, I know I am, but this book is beautiful and deserves every star I can give it. I’m sorry this review is more of a discussion of the topics than the book itself, but I don’t think something this heavy deserves being reduced to a discussion of syntax and plot structure. It was a trip for me to read more so than a book usually is and I’m just so glad I had the emotional energy to tackle it.

I AM CURRENTLY ACCEPTING REVIEW REQUESTS.
Please read my review policy before submitting a request.
looseleafbooks@gmail.com